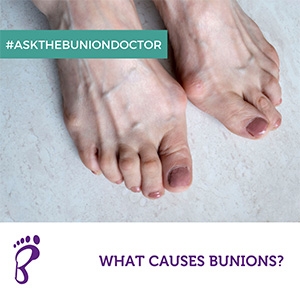 One of the most common questions from bunion sufferers, and one of the first I am asked in clinic is 'What causes bunions?'

This has been a subject of debate for perhaps a century and there is no one definitive cause that has been medically proven.

There are however, several factors which may have played a role in bunion occurrence, or worsening, which I will take you through below.

1 in 4 people have a bunion and for the majority, it is inherited. For me, this is one of the key factors in the likelihood of getting bunions. Studies have shown that 85% of bunion sufferers have a positive family history. And indeed, when speaking with my own patients in clinic, I often hear about a grandmother, mum or even dad who has had bunions. What exactly it might be within genetics that causes the bunion leads me on to my next point.

A much rarer cause of bunions are general inflammatory conditions such as rheumatoid arthritis and psoriatic arthritis. With modern medicine controlling these conditions, I don't see these causes much at all in my clinics.

Instability in the mid-foot

We do know that bunions occur when the long bone (the metatarsal) that connects to the big toe, deviates inward. The reason the metatarsal moves is related to an instability in a mid-foot joint (which may be inherited), allowing the bone to swing inward. This movement creates the bunion prominence on the inside of the foot, below the big toe. The prominence is actually normal bone but in the wrong position as opposed to growth of bone, which often surprises my patients, and some professionals!

The way your foot behaves might also have an impact on the likelihood of you developing bunions. Conditions such as flat feet and lax ligaments may contribute to bunion occurrence.

Whilst poor footwear, and in particular, high heels have developed a bad reputation, they are not in fact the initial cause of bunions. It is true however, that poor footwear and high heels (especially the pointy ones!) can make a pre-existing bunion condition worse and one of the first non-surgical options I recommend is to wear wider-fitting, supportive footwear or to try bunion pads or silicon spacers. But often, these routes do not alleviate symptoms long term as bunions tend to progress over time.

Even though a woman may develop a bunion during pregnancy, and despite plenty of web pages purporting that one cause of bunions is pregnancy, there is actually no scientific evidence to support pregnancy being the cause of the bunion. Some existing foot problems can become worse during pregnancy and the feet shape do change in pregnancy. There may be two reasons for this; weight gain and hormones. However, despite these changes, it has not been proven that pregnancy causes a bunion!

In conclusion, there are several factors that may have caused a bunion (and others that probably have not). Whatever the cause, the good news is that bunions can be treated. If you are suffering with a bunion and would like to book a consultation, please get in touch.